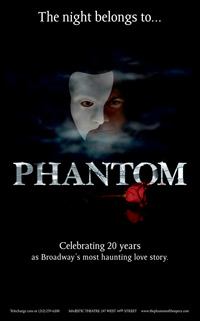 In Phantom of the Opera,  Christine’s compassion for the Phantom leads to transformation:  the Phantom’s heart softens and he lets Raoul and Christine go free, he himself is set free from his bitterness and hatred, and he escapes the mob after physically transforming himself to elude capture.

Think about other stories you have read or seen in which a character  shows compassion for another.  How did that compassionate act change a character or move the story in a new direction?  Name the story or character and share your observations.

Another way to think about the question is to turn it around:  can you think about a story in which the withholding of compassion has turned a character or a story in a different direction from what it might have otherwise gone?

Can these questions apply to nonfiction as well as to fiction?  You may answer with a nonfiction example if you prefer.

Write a comment in order to respond to the question, or respond by elaborating on another student’s comment. 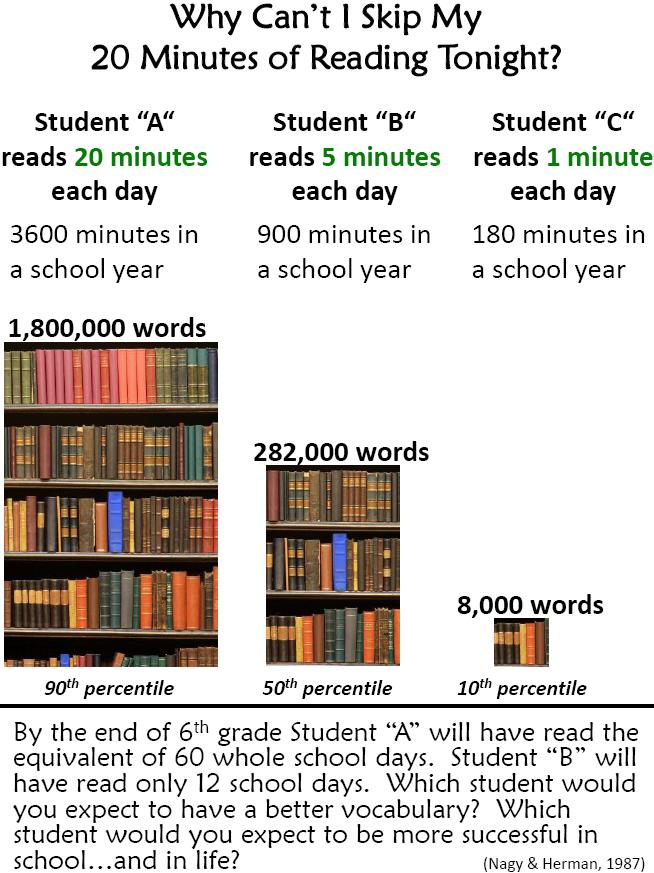 The message of the above graphic is one we already know:  reading is important, and reading every day fosters academic strength.  Chances are that the more you read, the better student you will be…the better thinker you will be.

At the seventh grade level, we ask that you strive to read 800-900 pages in a nine-week time period, that you log the titles of the books you read, and that you obtain a parent signature next to each title as corroboration of your reading.  Reading that many pages means reading regularly, even though you may not keep to a 20-minutes-a-day schedule you had when you were younger.  We all have more time to read some days than we do on others.

Recently, we teachers have lifted the requirement that you read at least one book of a specified genre per nine weeks.  The most important thing isn’t what you read, but that you read.  I appreciate these words by educator and reading expert Donalyn Miller: “Reading belongs to readers, not to teachers. If we want children to see reading as anything more than a school job, we must give them the chance to choose their own books and develop personal connections to reading, or they never will.”

We’ve made that small change, but I’m thinking there need to be more changes.  I’d like to open a conversation about how we do reading at school, and I’m asking for your input.  Parents, feel free to add your thoughts, too.

Parents and students, I look forward to hearing your answers to these questions (and any other thoughts you may have about reading) in the comments section of this post.

It’s wonderful to really hear students’ voices come through their writing.  We’ve talked about the progress they’ve made as writers, and the kids observed that they are writing with more expression and with better organization.  They’d love to have your feedback on their compositions!

Cierra had a great time at summer camp.  Read about why she loved it so much.

You’ll enjoy Ethan’s humorous explanation as to why kids should not have to do the dishes.

Grant’s description of his favorite food will make you hungry!

Nina is a poet.  Read this poem, then visit her blog for more.

Tired of the cold?  Not Regina.  She explains why she loves winter!

Ryan’s narrative about his recent fishing trip puts you right on the water with him.

Overdue library books?  You can empathize with Valerie as you read about the pain of late fines.

Our expository writing has been so enjoyable to read!  Check out the following links (and others to be found in the student blog roll) for compositions that are alive with voice and filled with thought.

Don’t be a corner-camper!  Steven explains how NOT to play video games.

Soham informs us of the disadvantages of using electronics.

A student who DISLIKES snow days?  That’s Matthew.  He explains why.

Izzy shows why Telluride is a great place to visit.

“Bow ties are cool!” declare the Doctor and Gabriel.

Ava explores the many meanings of the color red.

Short expository essays, fiction, poems, and personal narratives have been posted by third period students.  Enjoy this sampling of their work!

“The fun is in the risk.”  Eli explains why he loves riding his mini-bike.

Irma calls shotgun!  Read about why the front seat is the best seat.

“The sun falls back underneath the earth.”  Clara’s sunset will leave you in awe.

“Too bad it’s not turkey season, I thought.”  Clay narrates a hunting adventure.

“The Merchants’ Village” is a chapter story written by Jane.

Bryce explains the different ways in which people can wear masks.

You’ll be counting the days until summertime after you read this post by Lauren.

Our writing from the week of February 10 has been entertaining and informative.  Enjoy this small sampling of student work, and visit the links in the blog roll at the left to read more of what our Wildcats have to say.  Comments welcome!

Emma paints with the color blue.

Alena expresses her thoughts on the Olympic sport of curling.

Grant shares the pressures of being a baseball pitcher.

Lucca explains his love of lacrosse.

Joseph shows why football is awesome.

We are about to begin an exploration of another story, this one told through music. Even though Phantom of the Opera is mostly delivered through song, all of the elements of plot that we find in fiction books are there:

Enjoy this video as a review of those elements.

Need an idea for your next expository writing assignment?

Let’s think about this together.  We know that expository writing can explain:  it can explain why you think something or how something is done.  Perhaps you’ve been reading some articles this week about the Olympics, explaining the history of how certain sports have developed over time or explaining an opinion as to why Russia should or should not have been awarded the games.

You can think about aspects of your own life and explain the how or why of topics you know well:

Once you’ve found your topic, remember to organize your thoughts into paragraphs:  an introduction to establish your controlling idea (don’t give your reasons or make your points yet); body paragraph(s) to develop that idea with your reasons, supporting them with specific support/elaboration/commentary; and a conclusion to echo the controlling idea and leave your reader with something more to think about.

After reading several Newsweek “Favorite Mistake” columns, we wrote about some favorite mistakes of our own:

“There was nothing positive about this. My head lowered. My stomach sank. What had I done?“  Julius recalls an incident involving the family pet and auto repair.

“I can’t remember what happened next, only my father coming in with a bowl of water, him yelling, and the unbearable stench of smoke.” Microwave mishaps befall  Mara and Yasmine.

“As if things can’t get any worse…they do.”  Read Vayda’s account of signing up for P.E.

“My hands were shaking and my heart was pounding so hard that I could hear it.”  Rachel shares a story of anxiety.

“There I was lying flat on the ground— eyes widened as if the world had just flashed before them—and for me, it had.”  Learn why Vivian was so upset.

“The whole thing seemed like it was in slow motion.”  Caitlyn narrowly avoids disaster.

Note that the Newsweek columns are based on interviews, written in first person but by a third party who had talked with the man or woman who had actually had the experience.

In class, we discussed how our favorite mistakes would be different:  ours would be personal narratives, written in first person by the student who had had the experience. For this assignment, our goal would be to show the event in more detail than the news magazine columns had, in a way that the reader could feel what the writer had felt.

Leave us your comments and let us know how we did!